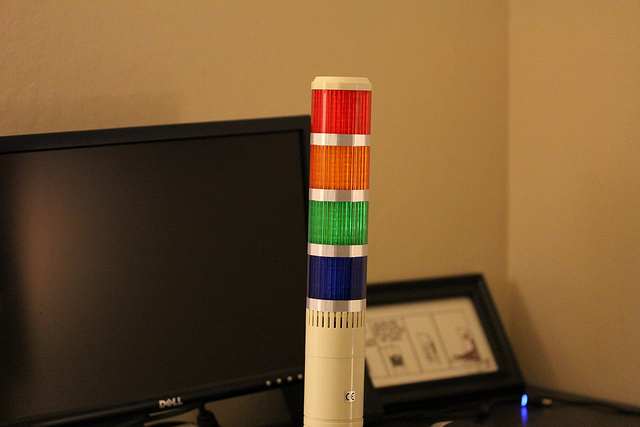 Over the weekend, my roommate and I made a trip to HSC for some random hard-to-find parts. Looking around their back room, I spotted a box of surplus industrial signal towers. There were many different varieties, I picked up the above unit still wrapped in bubble wrap inside a plastic sleeve. Another open unit had power ratings marked on a sticker — 24V AC/DC 1.5W max per stack. For $20, how could I say no?

I picked up a few Aromat TQ2E-5V Relays, as I had planned to control this contraption with my newly arrived Arduino Unos. The Aromat relays don’t have an exact datasheet available online, so I found a compatible datasheet for the Panasonic branding of the same model.

Once I got everything home, I opened up that Patlite unit. I noticed it had what appeared to be a speaker or buzzer inside the vents below the color Blue. Peering down inside, there appeared to be a bit of protoboard stuffed inside as well. Taking the whole thing apart was easier than expected — the screw on top of the unit releases all of the colored lenses. Each lens is backed by an array of LEDs of the same color. All colors appear to have the same number of LEDs with the exception of blue — as the blue LEDs are exceptionally bright. Once I got down to the buzzer and protoboard, I found a series of KBP204 rectifiers, a capacitor, and a piezo buzzer. I had planned to power the Patlite unit with a spare 12V 2A wallwart so I removed the entire protoboard, and connected the leds directly to the cable coming out of the bottom of the unit. Some quick testing showed the wallwart to provide more than enough power to light up the LEDs with plenty of brightness.

I wired everything up on a breadboard. The Arduino uses 4 digital output pins to switch the relays at 5V. My first attempt to get everything working, I found that I had inverted the polarity of the relay coil. Instead of making a resounding click — they made a very quiet chirp. After a bit of trial and error, everything was sorted out, and the light was all ready to go. I wrote a very simple extension of the LED blink example code, to randomly turn the color modules on and off. The TQ2E’s produce a satisfactory musical click as the coils energize, so it is quite pleasing to run the random pattern for testing. You can find a video of the Patlite unit and the breadboard, along with the full photo gallery after the break below.